Posted by A at Monday, October 08, 2007
My sister had really bad sushi cravings, so she went to Sushi Train and bought like 10 packets of sushi. There were so many weird types! I know, I'm Asian, I'm supposed to eat weird things. I'm not THAT asian though. I prefer being known as Malay. One of my Chinese friends asked me if my mum cooks weird food. I asked him, "Like what?" and he said "Blood cubes."
*Gag*. Might be racist, but I find eating blood really offensive.

Anyway, back to the sushi. In the package was soy sauce, Japo mayonnaise, wasabi (!!!) and of course the different types of sushi. The one I mainly eat is prawn tempura sushi. That is really nice. It's prawn fried in some batter and wrapped in rice and nori. The only other time I've had something different was when I accidentally ordered normal prawn sushi (which was SO GROSS; the prawn was all cold and it stank). Oh, and there was that one time I was in the city with my English teacher and Azmena for some lecture, and I thought I'd try the raw salmon and cucumber; I put too much wasabi and gagged on it and they all had a good laugh.
Skanks.

Any-hoo, this time, I tried a few different things. Raw salmon and rice was a bit strange. It didn't really have any taste, it was just kinda squishy and gross. Lobster sushi was nice, a bit strange, but nice. I had more prawn tempura. YUM. Then there was EEL. I actually ate it. It was eel and egg. Such a weird combo, it was SO weird tasting. 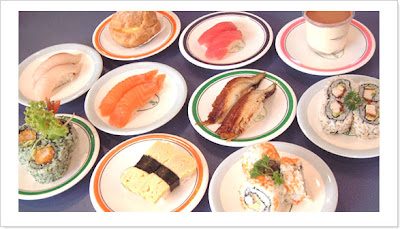