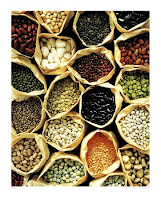 Life is weird. How do I know this? I just do.

Anyway, I've always ALWAYS had this idea since forever that being a vegetarian is haram. Like full-on forbidden. I thought everyone thought this way too! In my head it was something to do with "making something forbidden to yourself from that which was made as a provision for you." I didn't bother asking anyone (which btw ppl is a bad habit).

Then recently, after an Arabic class I asked my sheikh, "Is vegetarianism haram?" and he looks at me funny (like I'm delusional). Then he said, "No! Of course not. There's nothing wrong with it." I was like HUH WTF? BUT BUT. Then he goes on and explains how in Islam meat is considered an extravagance and how meat cultivation is a major environmental detriment which is against Islamic principles and I was all like HUH HUH SINCE WHEN.

So suddenly after all these years of viewing vegetarianism as that weird but cool concept that appealed to me and which I might have like to have done but never seriously would have has suddenly become something real and concrete. Weird sentence, I know.

I haven't eaten meat in a while now.